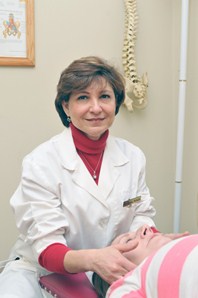 Pasadena and the San Gabriel Valley is well known for above average hospitals with exceptional trauma units as awell as doctors and specialists in many fields, cancer research facilities and a major scientific lab known as JPL among its other selling points.
Also within our reach is the Pasadena Rehabilitation Institute (PRI) at 1017 South Fair Oaks. Within these healing walls works a quiet, kind and gifted Chiropractor, Nazee Rofagha, DC, CEAS at the Family Chiropractic Wellness Center.
A Doctor of Chiropractic since 1995, Nazee Rofagha (I call her Dr. Nazee), truly has a gift of healing not only in her hands but her heart.
Ever wanting to find new ways to improve on therapy for her patients, Dr. Rofagha contunues that eternal quest and seems to have an insatiatable thirst for knowledge in non-invasive pain relief and techniques.
The popular and charistmatic chiropractor recently became aware of a new technique for pain and stress relief know as NRCT™ ( Neurologic Relief Centers Technique ) which can release the tension in the meninges and subsequently releasing irritation to the nerves which are ultimately causing the brain to tell you where the pain is. The essence of the program works with the CSF (Cerebral Spinal Fluid). According to literature published by NRCT™ "the vast majority of health problems other than infectious diseases could be stress and neurological in nature."
Having had more than my fair share of pain in recent years, this reporter decided to see for himself if, in fact, this NRCT™ might be an answer I was looking for. After my initial examination/consultation Dr. Nazee asked me what my pain scale was (ie 1-10) it was about 5 this particular morning. The doctor placed her hands carefully on my neck and used some pressure in an effort to relieve some leg/knee pain I had been experiencing.
The results were actually more profound than I initially thought.
I can, without reservation, say I could efforlessly walk down the stairs from her office to my car where I had a few minutes earlier used the elevator over the stairs due to the pain. I also felt more alert which is intersting as I only had one cup of coffee this given morning and not a particularly great sleep the previous night. While I had only the "Relief Test" applied to by neck by Dr. Rofagha, I could see the benefits immediately upon standing and know if I continue a course I will be able to significantly reduce the stress and pain in my life. It may not be for everyone. It did seem to work for me.
The NRCT™ is non invasive and many people such as myself respond immediately or within a short period of time. Some of the more common maladies that seem to respond to NRCT™ air Fibromyalgia, numbness, migraines headaches, forgettfullness, burning senstaions, insomnia and other pain anywhere in the body including the hands and feet.

One of Dr. Rofagha’s patients suffered from chronic migraines in September 2011 and she also mentioned she had Crohns Disease. Here is what this patient mentioned to Beacon Media "She (Dr. Rofagha) started treating me chronic migraines which started in 2009, they disapeared in 2010. The Crohns has given me daily abdominal pain, cramps and stomach upsets, constant uncontrollable diarrhea, excruciating abdominal pain upon touch, and a number of trips to the emergency room. After seeing Dr. Rofagha I noticed and immediate response with the Crohns. During her treatment I could palpate my abdomen and the pain would lessen and eventually become none existent. My urgency to have a bowel movement lessened, and went from watery diarrhea to loose/soft and sometimes firm stools. I felt rejuvinated after treatment and even felt a change in my diet. After her treatments I noticed that I wasn’t craving snacks and junk food as much. With the exception of one episode, my migraines have been non-existent since seeing Dr. Rofagha. She has taught me how to stretch, massage, and overall destress to prevent the migraines. The treatments have helped strengthen my immune system the way my body copes with stress."

In doing some research for this story we came across another Pasadena patient, Susan who told us the following:
"When I was eight months pregnant with my son, I developed tingling and numbness in my hands and feet. My doctor told me that I had carpal tunnel in my hands and that the same condition can occur in the feet. This diagnosis did not sit well with me, but there was very little I could do while pregnant. My condition worsened over the next month to the point that I felt as though electric shocks were going through my feet and legs. My pain level was so high after my son was born that a simple needle prick for a blood test sent me over the edge. I saw several specialists over the course of the following year. The doctors performed two nerve conduction tests and determined that I have an autoimmune disorder. My body was attacking my central nervous system. I was prescribed Nortriptyline to manage the pain, but there was nothing else the doctors could do. After four years I was left with continual tingling and numbness in my hands and feet. Simple tasks, such as typing, tying shoes, or opening containers, became difficult. I couldn’t get up in the morning without first putting on shoes because walking barefoot was too painful. In August of 2011, I developed pain in my upper back and neck. I went to Dr. Nazee Rofagha to seek relief from this new pain. It just so happened that she is one of few doctors nationwide who practices this new tech called NRCT™, she explained the tech and stated that it should work on Neuropathy, She asked if I would like to give it a try to see if it works on me, so I did and felt an immediate change in my hands’ sensations for the best. She only implemented this procedure for the correction of my mysterious condition.
After receiving continous treatments with Dr. Nazee Rofagha for a month I encountered significant changes. The pain in my neck and back went away. The tingling completely disappeared from my hands and it is no longer painful to touch objects. The most significant difference is that I can now walk across the floor without wearing shoes. The difference that she has made in my life is amazing and life changing."

It might not be right for everyone but as one wise man said "The doctor of the future will give no medicine, but will interest her or his patients in the care of the human frame, in a proper diet and in the cause and prevention of disease." That wise man was Thoman A. Edison who lived from 1847-1931.

Dr. Rofagha works closely with the group’s (PRI’s) medical doctors in treating the whole patient. In using this non invasive technique Dr. Rofagha will likely attract more MD referrals and is currently offering a free gift of a relief test to see if this treatment is right for you. Click here to find the closest doctor to you to schedule your free visit.