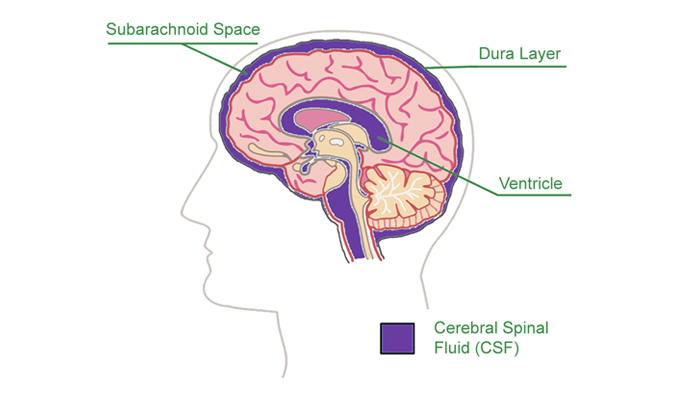 Meningeal Compression could be caused by an encroachment or twisting on the three-membrane protective covering of the spinal cord and brain, called the meninges.

This intrusion might be from a tumor or other malformation, but we find that it is most often caused by a change in the cervical spine, which can reduce or distort the space through which the spinal cord and meninges must pass.

Any tugging on the meninges can have devastating effects on this critical and sensitive nerve action, which in turn can produce a galaxy of undesirable symptoms.

Nerve roots are extensions of the spinal cord that turn and exit between each vertebra, sending and receiving impulses that control virtually the entire body, even the smallest parts. Since these nerves pass through the meninges, naturally it follows that every bodily system can be affected by the pulling of the meninges. These nerve roots also extend fibers to the brain, which transmit impulses that are then received as pain, burning, itching, hot, cold, tingling, or numbness, as well as other parasthesias (that is, odd feelings).

The pulling and irritation of these nerve roots cause nerve fibers to fire maverick impulses to the brain. The brain interprets these fired impulses as pain, itching, burning, coldness, numbness, or other odd feelings. The body, in response to stimuli from irritation, will often twitch or spasm, thus prompting the restless leg syndrome, muscle tightness, and spasms often experienced by fibromyalgia patients.

Typically irritation of the nerve roots, when it hits levels that are diagnosed as fibromyalgia, bombards the sufferer's brain, overwhelming the autonomic and sensory pathways, keeping them in pain, awake at night, fatigued, and depressed.

The symptoms of possible Meningeal Compression may vary from person to person. They may be debilitating - as in a severe case of RSD or Fibromyalgia - or be less severe in a milder case of fibromyalgia, mild facial pain or trigeminal neuralgia. Including the whole galaxy of symptoms would be impractical, because the nervous system controls the entire body and can affect all the systems. Here, then, is a partial list: